“What is man without the beasts If all the beasts were gone, man would die from a great loneliness of spirit. For whatever happens to the beasts, soon happens to man. All things are connected.” -Chief Seattle

A few years ago I decided to go on a road-trip along the Península de Nicoya in Guanacaste, Costa Rica.

Guanacaste has a lot to offer and costaricans are lucky to celebrate the annexation of this vast land of natural wonders, which before 1824 was most of it part of Nicaragua.

Beyond the hundreds of beautiful places that Guancaste’s shoreline offers I was focused on exploring some of the Islands, but I wasn’t aware of the existence of the “Bat Islands” when I started the trip. This Quest really starts off North of the the Península after a week of driving, visiting villages, beaches and sailing in small boats to different islands.

Costa Rica doesn’t really have weather seasons, we have wet and dry season. During dry season Guanacaste turns into a very tough country, but during this time of the year, the natural display of colors in it’s landscapes are amazing. This is a story of wild nature put into contrast against its magnificent beauty. 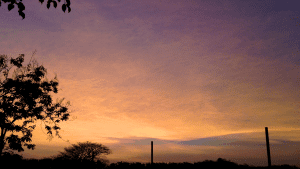 I’m driving north and for about half an hour you go through a dry tropical forest that looks like a haunted desert filled with impenetrable creepers and trees that look like climbing plants right from a knight’s tale. How is nature capable of creating this brute living landscape? Hostile and fearless; they protect the many other plant and animal species that live around the sweeping protected area that comprehends the Santa Rosa National Park.

Just driving out of this road, I wanted to stop by on a small village to have lunch, but suddenly an unexpected sand storm hit me from a side, I didn’t want to brake, because I wasn’t sure if a car might hit me from behind, so slowly I drove through this gust of dust as it was getting thicker and heavier,  until I came out fine through the other side, it was kind of exhilarating! 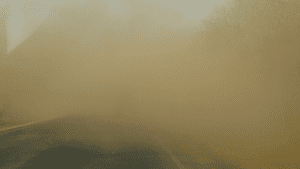 I drove out to a small fishermen village and found a small place by an estuary; decent food, great ceviche! I was finishing my meal while looking at one of the frames that hanged on the wall in front of me. I saw a map, intrigued by it, the map didn’t seem to be of Costa Rica, so I went closer to take a good look and to my surprise it was a close up of Santa Rosa’s National Park and its shore. I noticed some islands, an archipelago called “Islas Murciélago” (Bat Islands). Interested by it’s name I asked the friendly waiter if she knew how to get there.

“Sure! My uncle is sailing there tomorrow to carry some supplies for the park rangers”

Kindly I told her to contact him and ask him if I could come along.

When the waiter brought back my bill, I payed for the lunch and I stared at her excited to hear what her uncle had said.

“He’ll pick you up here at 7am. I’ll have some breakfast ready for you and fried fish for take away.” 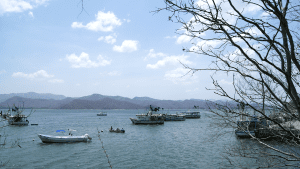 Fishermen at the Santa Elena Gulf

I woke up early to try and find a place to buy some fruits, maybe a sandwich, drinks and water to take on the boat ride, even though I was counting on the take away fried fish to have lunch on the island. After an encounter with cattle in the middle of the road for some long minutes I was able to buy some of the stuff I planned and sharply I managed to arrive to the meeting point with the waiter’s Uncle. 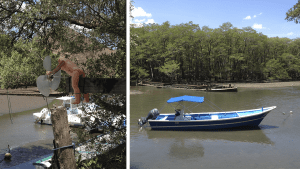 On the left, some nice decoration at the restaurant (meeting point). To the right, my ride!

The Captain and I loaded the boat with the supplies he was carrying to the Park Rangers, I took my camelback and a couple of small coolers with some fruits, drinks and the fried fish. Once out of the bay, time seemed to go by very slow as the motor boat had just enough power horses to sail the heavy swell, but we did fine, it just took a bit more time than estimated even though it was already a long way to the Islands.

The sun light painted the sea with a deep blue color and the areas with less swell, reflected a royal resplendent blue. Getting closer to the Bat Archipelago felt like entering Jurassic Park, a different World, almost as if it was an unexplored land of beauty. 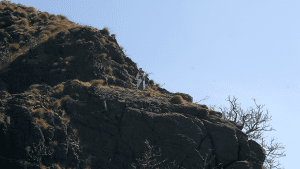 We tied the boat transversely to a sign that read “Isla San José”, the main Island out of five or six other islands that make up the Bat Archipielago.

White soft sand spreads across the shore we docked in and a grassy low mountain range protects the opposite side of this small slice of paradise. The shallow cold water underneath the boat was crystal clear; actually the Captain told me the water visibility is usually 30 to 100 feet (10 to 30 meters), but that specific day the offshore wind was quite strong. 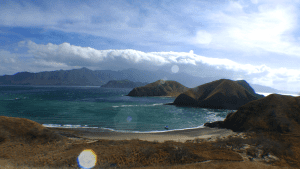 The Captain showed me the way to a spot where I could leave my things and have lunch, then he went to the Park Ranger’s shelter to deliver the supplies. I was trying to eat my fried fish, but the view from every spot on the Island was amazing, so before finishing my fried fish I decided to take some pictures around from where I was eating and in just a few seconds I was surrounded by maybe more than a dozen iguanas lurking around my fried fish. 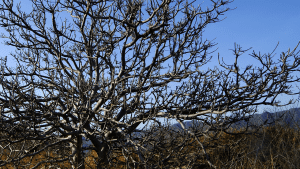 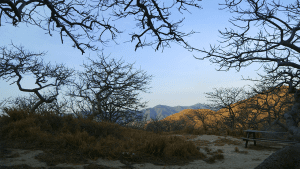 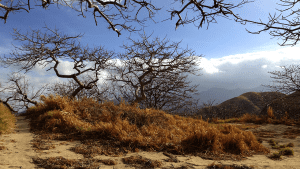 The beauty of the Island’s surroundings was majestic and the lonely resonance of the small waves reaching the warm sand gave the environment a sense of serenity that somehow made me feel overwhelmed by the grandness of all that nature concentrated in a small piece of land. It makes you feel small and vulnerable.

I was thinking about how the defoliated trees around me looked like dried rivers of arms reaching towards the blue sky when suddenly the silence broke with the Captain’s voice.

“Im afraid we won’t be able to go back to mainland today. The winds are getting stronger and the waves are bigger, my boat will crack in two if we try it. But don’t worry I have a camping tent you can use.”

As the sun went down I thought, well thats ok, I don’t have to get back to mainland any soon now. It’ll be cool to explore more of the Islands tomorrow.

I set up the small tent, which had a couple of broken poles, the rooftop  wasn’t high enough to hold steady the tent, but once laying down it didn’t actually matter that much. 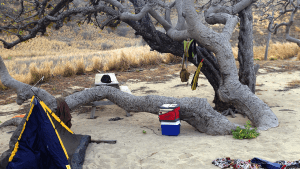 The night creeped through the dried tree branches giving way to very strong winds. It was pitch black and I could only hear the winds trying to tear my tent to the ground. With little sleep, a few hours after midnight I sensed a light approaching my camp site, I went out to try and find the source and it was the Captain with incredible news.

“There are some sea turtles entering the shore to lay their eggs! Let’s go see them!”

It was a sleepless night, but a very splendid one. We managed to see 3 huge sea turtles slowly crawling towards the dark beach. With a red filtered flashlight we managed to watch the spectacle, all the way until every turtle found their spot to lay their eggs. The Captain explained to me that this Archipelago is a hot spot for millions of sea turtles and part of the ranger’s work is to protect them and mark the spots where they nest.

I went back to my crippled hut and try to have some sleep. 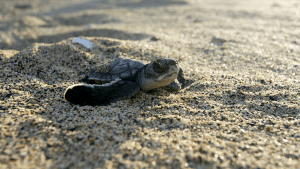 Very early in the morning I had some leftover fruits for breakfast and met up with the Captain at the beach, ready to go find sea turtle eggs.

There were lots of marked spots, each with thermometers and labels with dates, so we started digging through the ones that should be ready to hatch. Deep enough, lots of egg shells and tiny small turtles started to appear and carefully The Captain and one of the Rangers placed the turtles out of the hole to be aided out of their shells. 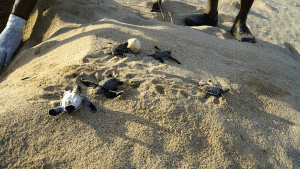 As quick as life is brought to light, Death starts to roam around darkness.

Some of the small creatures are born dead and some eggs didn’t finished completely their stage. This is common and nature knows no waste. Immediately hundreds of hermit crabs surface the golden sands were the dead are laying, they start feasting. Iguanas skulk from behind fallen trees and wait for the right moment to hunt the tiny turtles that clumsily crawl towards the fresh water currents. Birds startle some of them from the sky. 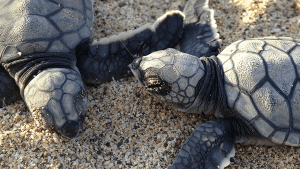 Few of the small turtles make it, as they have other predators at sea. But the most incredible part is that those that make it to adulthood, come back hundreds and occasionally thousands of miles back to where they were born and the cycle repeats. It’s an amazing event to witness. It’s hard to imagine these tiny beings will grow up to be the huge strong reptiles we saw at night.

Once we “freed” the rest of the marked spots, we go back to the Ranger’s shelter to check the currents and winds. Bad luck, we are still trapped in the island, heavy winds are expected and strong currents against our course, but also we don’t have any food and my water ration is low. Not to worry, let’s wait and see if the situation gets better.

I then decide to hike around the soft hills that surrounds the Island in a horseshoe like manner.

The views are just breath taking, I have never seen landscapes like this in Costa Rica. 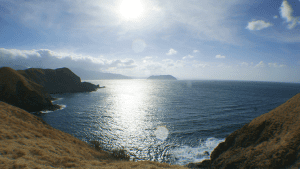 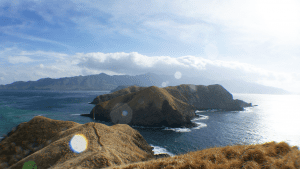 I stay up there as much as I can. I don’t want to leave and maybe it was a good thing that we couldn’t leave the Island yet.

The Captain needed to leave, plus we didn’t have anything else to eat. So he talked to me and told me that we must try to make it back under the bad weather conditions, he’ve done it before, it’s not a fun trip, but I trust him.

Fascination with a mountain put to sea, built to slay and conquer all with teeth of beasts. -Brann Dailor 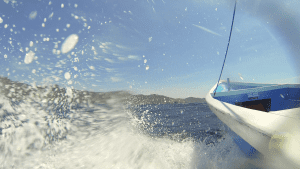 We committed ourselves to it and it was a terrifying long trip. Uninhabited rocky landforms shape-shifting into Beasts. Skerries with minimal vegetation, big enough to be a sea monster threatening us by lashing the water into a sea of waves. The beautiful landscape we had gone through before became a wild hazard, a threat from nature. 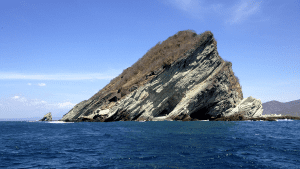 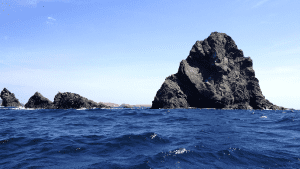 It took us almost twice the time to get back, attacked by what felt like huge waves under us. I was holding on to my life, trying no to fell off the boat, while the boat slants trying to surf the tidal waves. At some point I thought it will never end, my arms were getting tired of holding to the straps that kept me inside the boat, but I lingered as much as I could. Finally, after what felt like hours, we entered the estuary from where we had set sail.

I was covered in a white thick powder; sea salt, dried by the blasting heat of the sun. I had a couple of beers at the restaurant to relax my tense muscles. I thanked the Captain for everything and took off to finish the road-trip. Later that night I will feel a heatstroke and a heavy sun burn that left the life jacket imprint on my body for over a month! 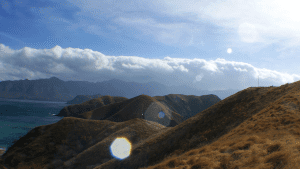