“…the fear of solitude is at root a fear of oneself…”

Sometimes I like to just drive in oblivion; nothing on my mind but the road while listening to my favorite tunes. It feels like escaping from everything. Will I ever go back? Do I really want to go back? I could make a whole new life anywhere where the road leads me;  stopping whenever and wherever you like, no strings attached. This is how you best get to know places you will never think of planning, but even better, you get to know yourself. That’s how I ended up in Cabuya.

Getting to Isla Cabuya is quite a ride. After taking a ferry, you drive through small touristy beach towns, which if you live in Costa Rica are really famous for their nice beaches, tourist traps and party paradises, so I was wondering if Cabuya would be similar, but as the road became rougher and tougher, I knew I was on the right track to finding a gem of a land. As I got further away, the road was rocky with sandy paved reefs that allowed cars drive by. Small bridges with huge rocks that have fallen from the side hills made the road seem hard, but with patience and a bit of positivity, any car can go through (I was driving in the rainy season). The driver’s side-view was amazing! The road takes you through a rain forest jungle right by the shore line, the sea always by your side. 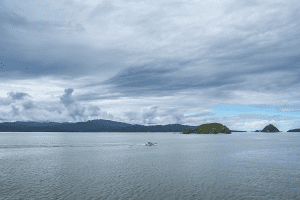 View from the Ferry

I like being alone, it’s relaxing and you really can get your head clear. I read that solitude can forge our character, away from the demand of others, maintaining our independence. I think this is very important and healthy, it’s somehow a way to stay sane and it avoids losing our identity to what others might “cultivate in you”.

For any outsider of Costa Rica and even for most costaricans getting to Cabuya is a Green Paradise, not virgin, but enough to be overwhelmed by its beauty. Because I was there in rainy season, most of the restaurants and “sodas” , bars and hotels were closed. The welcoming small town is very simple, it has a few coffee shops, a bakery,  a main bar and a few beach front hotels, all looking very old and neglected. The town is covered by 2 or 3 main roads, one that leads the way in and out of town, the other takes you to the Cabo Blanco National Park and one that leads you to where all the fishermen gather to set sail.

“it is good to be solitary, for solitude is difficult; that something is difficult must be one more reason for us to do it.” – Rainer Maria Rilke

I arrived to Cabuya early, so the first thing I did (holding my crave to visit the cemetery Island) was to find a room or somewhere to get settled. As it was low season, most of the few hotels around were closed, but lucky me, there was an Irish guy with a nice small place that lodges several cabins. The place was pretty decent, a nice clean swimming pool; the cabins each had its own kitchen, bathroom, hammock, parking lot and a small meeting point that appeared to be a bar. The great thing about this place was that its beach front had a view towards the Mysterious Cemetery Island. Strange enough, inside the hotel’s property there was a small Irish cross that marked a burial – though I didn’t ask about it, as it might come too personal to the Irish owner.

Cabuya’s beach isn’t much of a typical beach that you would expect. It is rocky and the sand is filled with small shells that give a harsh texture to your bare feet. It’s almost entirely like that throughout its shoreline, but there are nice “tide pools” where people usually seem to hang out. 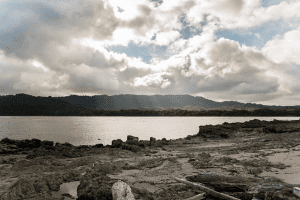 I’m not a beach person at all, but I was intrigued by the secrets and history of the Island. As soon as I settled in the cabin, I asked for directions and they told me to just walk along the shore towards the Island and so I did. The tide was already high when I started, but the distance didn’t seem much, so I kept on walking through reefs and wet sand. The sun was hidden between what almost looked as rainy clouds, so it wasn’t that hot, but still the high humidity made it hard. There was absolutely nothing on the shore, no houses, no hotels, restaurants or any other amenity, just me and the sound of the crashing waves as they haunted me with the rising tide.

To my surprise I heard some rattling noises near some trees; two giant vultures lurking on a fallen tree, I think it was a mother and its chick. After I took some pictures of them I just stared at them and tried to understand what they were doing. I kept on walking and what I saw was just weird, at first I couldn’t identify what it was, or maybe my brain didn’t manage to relate it to something that should be on the shore. A cow’s (or maybe bull’s) half chopped or eaten leg – I felt as if I was in the middle of no mans land where animals were kings. 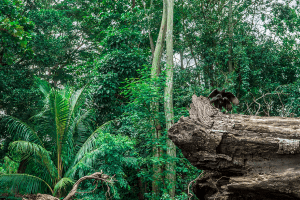 Further on the way, the tide was closing every chance to go back, but then again the animal kingdom drove my attention to a family of monkeys swinging just beside me. The experience got magical as they stared back at me as an unknown visitor, it felt as if I was their first human sight. I tried to play friendly but sadly I just scared them away. 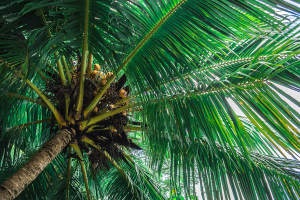 The whole shore was a closed path with an unpenetratable jungle, I forgot to eat something before I left and I was getting hungry, luckily I had enough water.

I realized that I was getting into National Park territory and the beach was disappering just in front of a huge mass of greenery landscape covering everything on its way right into the sea as far as the eye can see.

I soon managed to find a way where some fishermen where getting ready to set sail and from here there was a road that connected back to town. But I stayed there and watch the sunset while the fishermen were getting  ready under a colorful sky-background that the sun provided as it went down to dawn. 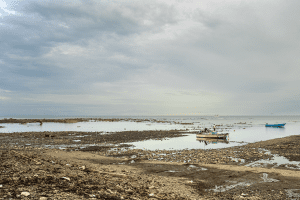 Cabuya is a small fishing town on the Nicoya Peninsula. Its Island is just off the coast and what makes it so magical is that you can actually walk to the island on low tide. What gives its mystery is that the Island is a cemetery that dates back to pre-Columbian times. According to the owner of the Cabins where I was staying, it was a sacred place for spirits, guarded and managed by a shaman. Later on, people that started to settle here kept the tradition of using it as a cemetery.

While staring at the dawn and making a time-lapse, a curious fisherman came to me and ask what I was doing. We started talking about the Island and dark humoring me, he told me;

“If you stay long enough and the town likes you, we might make room for you at the cemetery” 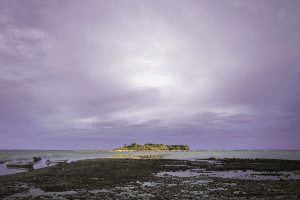 The haunted rumors of ghosts in the Island were roaming around and the colorful sunset captured its magic in the air. The picture above shows a frame of the time-lapse I took. From a cloudy dark sunset, all of the sudden the sky cracked open and shoot a beam of light right to the Island, while a whirlwind of purple hazy clouds rotated over the cemetery. What an amazing sight! I couldn’t wait to walk over and explore the Island.

Later that day, I went out to the beach at midnight to try and capture a starry night. But the moon was almost full and the clouds seemed to cover the sky like a blanket. I stood there for a while and from time to time looking through my camera’s viewfinder I would feel like seeing those hallucinations that give shapes to the void. I guess that was all part of the games the brain plays on you when you are in the dark, or maybe the excitement of being near a place that holds many stories throughout its history. 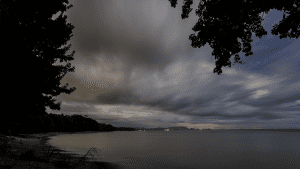 The midnight sky in Cabuya

Because the tide was high until mid-day, I woke up late. The day was sunny, almost no clouds in the sky. I took a dive in the hotel’s pool to cool down the heat, then I geared up my cameras and poured some water into my camelback from the kitchen’s tap water. This time I drove my car to the spot where I last saw the fishermen and started walking towards the Island through the reef cleared by the low tide. 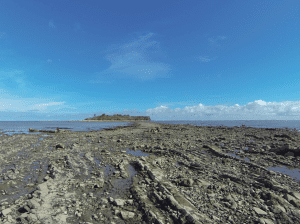 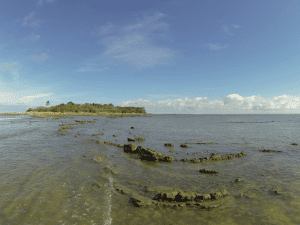 I didn’t wait long enough for the tide to go down, parts of the crossing was still coverd in water, but shallow enough to go through. Walking from one land to another was kind of exciting, but the arrival was even more thrilling. When you get to see the Cemetery’s entrance arch, it feels like discovering ancient ruins and you percieve that you are now part of that mystical piece of land that centuries ago belonged to spirits and legends. 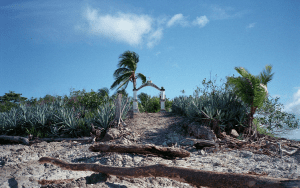 35mm film of the entrance arch to the Cemetery Island: Cabuya Island 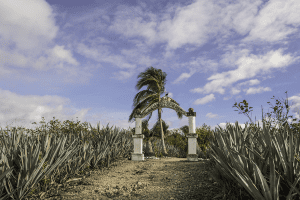 As I got closer to the entrance, two vultures flew and stood on the arch and the palm tree behind it.

The spiny agave plants that encloses the whole island and the literally dead silence inside, created an atomosphere of enigma and your whole body knows that something is out challenging you; you are in awe.

Once you’re inside and you get acquainted with what you’re dealing with, you get used to being in a cemetery, though, what makes it more exhilarating is that you’re not inside a standard cemetery, you are in a burial ground surrounded by reef and water. 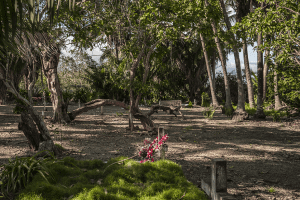 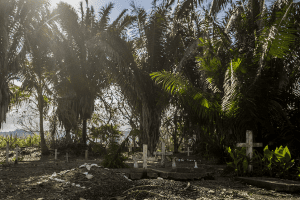 The day was so nice and it made such a contrast that it actually looked like a really nice place to spend the afterlife. I quickly understood why it was a sacred place and why it was kept that way until today. The entire island is preserved clean and well maintained; which is a sign of respect that honors those earthlings that have departed to a better place.

Huge palm trees protect the skies above, dancing, waving goodbye. The reef shields the land from the menacing waves that bulge with the tides, to preserve intact the remains of long gone memories. Finally but not last, the agave and bromelia enclosure inoculates the bad spirits and any other unwanted entities that might threaten any disturbance. 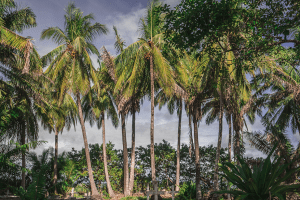 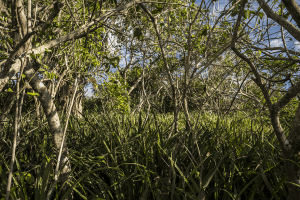 After experiencing the enchantment of the Island I walked its perimeter to find a small little beach with white soft sand, then continuing back to the main entrance where one of the vultures looked as if he was waiting for me, until he lifted off and so did I, I went back to mainland. 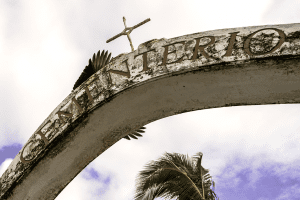